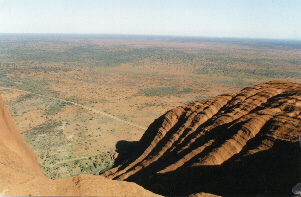 Around the beginning the Ancestral Beings rose from the folds of the earth and stretching up to the scorching sun they called, "I am"! As each Ancestor sang out their name, "I am Snake", "I am Honey Ant", they created the most sacred of their songs.

Slowly they began to move across the barren land naming all things and thus bringing them into being. Their words formed verses and as the Ancestors walked about they sang mountains, rivers and deserts into existence. Wherever they went their songs remained creating a web of Songlines over the Country.

As they traveled the Ancestors hunted, ate, made love, sang and danced leaving a trail of Dreaming along the songlines. Finally at the end of their journey the Ancestral Beings sang 'back in' the earth where they can be seen as land formations, sleeping. 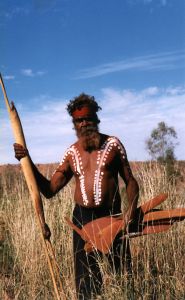 Australian Aboriginals are still one of the least understood people in the world. Since the nineteenth century they have been singled out as the planet's most primitive culture, the living representation of mankind's ancestors. In reality Aboriginal culture is complex, forming a subtle yet dynamic and rich way of life.

Small local groups form the basis of Aboriginal society. By sharing economic and ceremonial dealings with other groups they keep a close kinship and marriage ties with a vast network of others. With these relationships comes rights, obligations and appropriate ways of behaving.

Inheritance is central in the granting of ceremonial and territorial rights and responsibilities. A daughter and a son inherit one type of rights through their father, which in Warlpiri and other Central Australian languages classify them as 'Kirda'. Inheritance from the mothers line makes them 'Kurdungurlu'. Thus for any given Dreaming site there is a set of Kirda and a set of Kurdungurlu. If a woman is Kirda for her father's country, for example, the children of her mothers brother will be Kurdungurlu for that same area. Kirda, 'own' given countries have primary economic and spiritual rights in them. Kurdungurlu are guardians for the countries owned by Kirda. They ensure that the Kirda fulfill their social and ritual obligations with respect to their Dreaming Sites and that access to economic resources is maintained. During ceremony Kirda and Kurdungurlu interact closely through complementary roles.

The attainment of religious knowledge begins with initiation during adolescence and becomes a lifelong quest. Both men and women have specific religious ceremonies and hold particular segments of mythical information. Through participation in rituals people learn more about their Dreaming Stories and associated designs, songs and dances. Some of these ceremonies are secret (closed) and some are public (open).

When Europeans arrived in Australia they took control of the land and collected Aboriginal people on to communities. Being removed from their traditional lands, diverted the focus of Aboriginal Spirituality.

It is only since 1972 with land rights legislation and more recently the Mabo Legislation, that certain land has been returned to Aboriginal owners and policies of self management introduced. Many Aboriginals have moved away from the large settlements to establish smaller more homogenous communities on land to which they have traditional ties. Despite enormous pressure exerted on it, Aboriginal culture has retained it uniqueness and much of its strength. 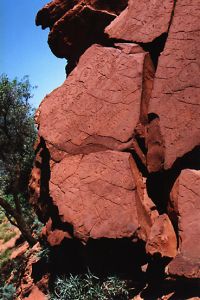 The traditional art of the vast Central Australian Desert has always been complex and impressive. Used in ceremony it was performed on large, irregular surfaces such as rock walls and slabs. It was also painted on the body and artefacts such as shields, sacred boards and ceremonial posts.

It was the arrival at Papunya in 1971 of a young white school teacher, Geoff Bardon, that provided the catalyst for an explosion of artistic expression. Bardon started a school project to paint a mural. The painting was taken over by elders who used traditional art to create "Honey Ant Dreaming", the Dreaming for Papunya. Following this the men began painting acrylics on any material available to them, including plywood, linoleum and canvas.

Acrylic paintings by Central Australian Aboriginals is one of the most exciting developments in modern Australian Art. Though the materials are of European origin, the content and execution of the paintings lie firmly within the framework of Desert Aboriginal Culture.

The paintings are mythical representations of landscapes or conceptual maps of designs wrought by ancestors. In this tradition sculptures, paintings, dances and songs relating to the Dreamtime are repeating the work of Ancestors, thus keeping the world alive.

The designs painted are not public property. Through the Dreamings the Ancestral Beings gave them to certain groups to hold in sacred trust. The relationship between the Ancestor, the Land and the People is at the core of Aboriginal Art.

Most individuals in Central Australian Aboriginal society are members of a subsection or skin group. Membership of a particular subsection is normally determined by parents skins, although there is scope for a skin to be assigned for an outsider, or non-aboriginal person.

The skin system is essentially a broad grouping of kin, including many people who are only distantly or notionally related. Through the skin system, it is possible to calculate ones notional relationships with others, and each skin collects together a particular set of relations. For example, a man’s own skin group includes his brothers and sisters, father’s father (and brothers and sisters), son’s children, and brother’s son’s children. The skin system also determines social relations; proper behavior (avoidance, respect, familiarity) rights and responsibilities, as well as ceremonial and land tenure relationships.

In Central Australia, the normal subsection system consists of eight skins, as is the case with the Arrente, Warlpiri, Pintupi/Luritja; the latter two taking the additional step of marking the different sexes. Groups neighboring these three usually follow a similar system except that some such as the Pitjantjatara and other Western Desert families, make use of a six section system, whilst Alyawarre in the north-east uses four. The following table summarizes the Central Desert terms, showing the variations across each language group. 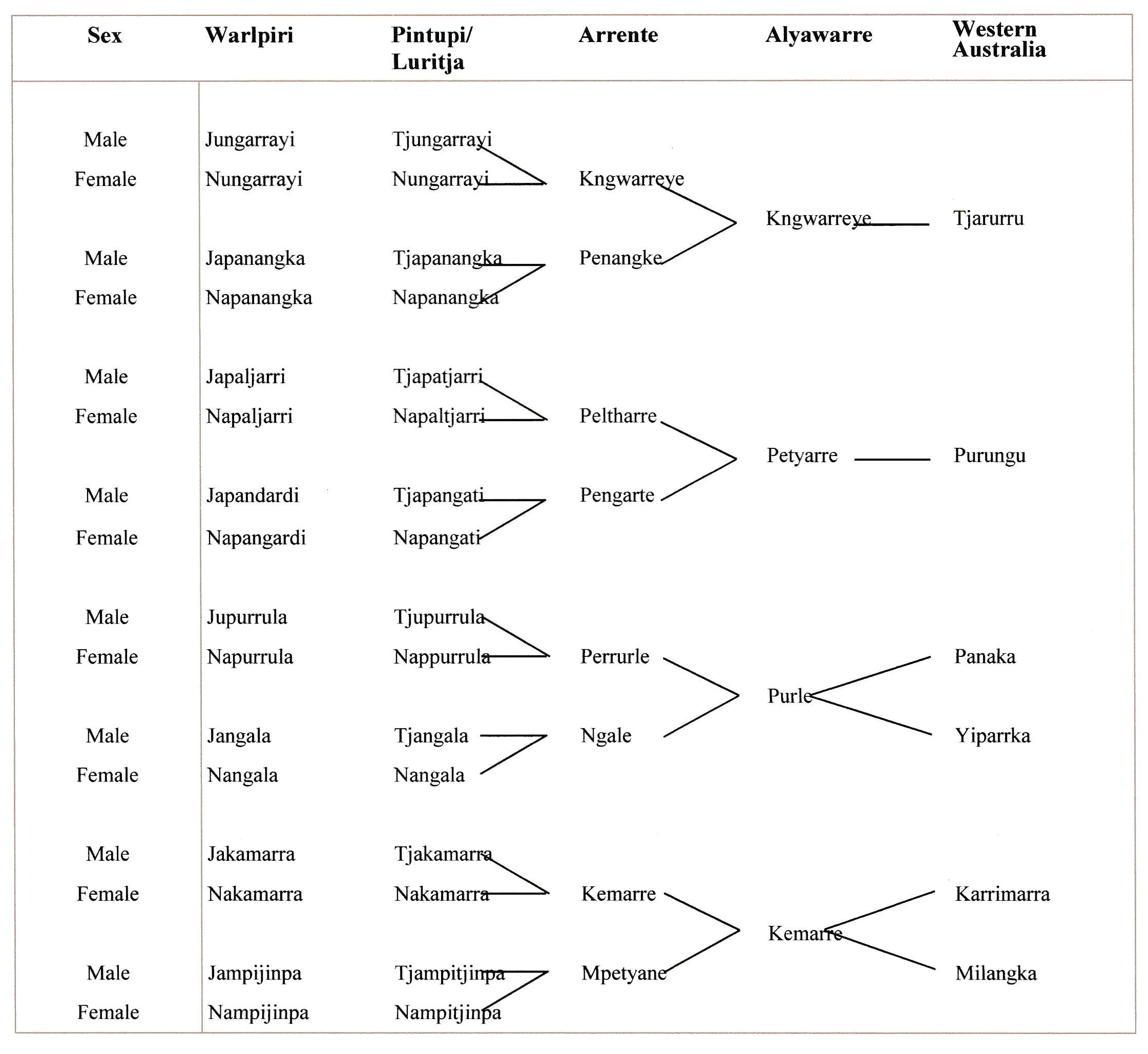 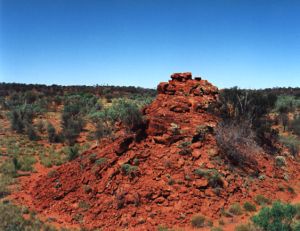 Australian Aboriginals believe that after the world was created mythical beings moved about the country fighting, hunting and forming the natural features of Australia, this time was known as the Dreamtime. “Jukurrpa”

The Dreamtime heroes by their own activity also set the precedents which govern human conduct for all time. Humans feel a special affinity with their related animal species which is a Totem. In most cases people are forbidden to kill or eat their animal totem. It is also believed that certain rituals have to be re-enacted on a regular basis in order to maintain the survival of the human group.

Most ceremonies are long and consist of charming or singing the myths contemplating the sacred objects and introducing them to initiates. Dancing and miming the actions of the totemic animals, hand clapping and beating sticks or stones.(The digeridoo is a important instrument played in ceremonies that are held in the far north of Australia).

There are two main categories of sacred ceremonies. The first -instruction through learning, sacred laws and behavioral codes. The second - through increase designed to ensure continuation of totemic species. Participants paint their faces and bodies with colored ochres and form patterns with headdresses, armbands and girdles, painted weapons and tools are paraded during mock battles and often painted poles are exhibited or placed on the ceremonial site. Sacred objects, places and positions are mostly kept secret from women and young men.

A rocky outcrop where Ceremonies were conducted. There are many engravings on the rocks relating to those ceremonies.

To recognize most elements in Central Australian paintings the viewer must know the site and the Dreaming depicted in the painting. They always refer to sites where mythical activity is believed to have occurred and where ancestral power still remains.

Artists employ a basic set of symbols, such as dots, concentric circles and curved and straight lines. All have multiple meanings depending upon their context. Despite this there are some standard design elements.

Concentric circles usually represent campsites or rock holes. Straight lines between circles illustrate the routes travelled between camps or places. Wavy lines across a painting usually is water or rain. A small "U" shaped figure represents people sitting and straight lines next to them are weapons or domestic implements. (see iconography page for more detail)

Tracks, whether human or animal, are often depicted in plain view as they appear on the ground. Lizards and snakes are frequently shown as one would see them from above. Significant plant species are generally shown in a stylised but figurative manner. Dotted primary motifs and backgrounds have become the hallmark of the acrylic movement.

Acrylic paintings are merely a new form incorporating the classic elements of Aboriginal Life. They state a person's relationship to those around them, to the land and to the Dreaming. Yet they also represent a new context of interaction between indigenous and western societies. Through modern art the Aboriginal people are able to introduce and express their culture to the world.