Ada, Born on a section of the old Utopia station at Atangkere, c 1930, remains a significant member of one of the most important groups to develop out of desert painting – the Utopia women.

Initially, this group, in which Ada played such a prominent part, Produced Desert designs on silk and cotton with the batik technique. These art works were produced first in 1977, the very year that the Anmatyerre and Alyawarre people began moving back on to their traditional land at Utopia Station where they resettled in a variety of outstations.

The success of the batik movement led eventually to the artists -mostly women– trying their hand at painting with acrylic on linen in the summer of 1988-9. Their efforts were well coordinated by CAAMA in what was termed ‘A Summer Project’. The project provided the opportunity for Ada to begin as a painter.

In the 1990s Ada Bird Petyarre reminds us that so much of desert art originated in body painting designs. During the decade 1989-99 Her painting, now in acrylic on canvas, has come to rely more and more on linear pattern making which at times has the frail quality of ochre or clay on flesh. Her paintings provide one of the last significant links with women's Ceremonial Knowledge. It is her fervent hope that the rising generation will continue to paint, dance and sing the manner of her own ancestors. To this end, Ada uses her art to instruct, teach and demonstrate to young women the ways of her parents, grandparents and beyond. Her art appears to be simple, direct and lacking in preciousness. It is, nevertheless, this ‘rawness’ which speaks clearly of her knowledge of the land, her people and their ceremonies.

Ada’s paintings are aligned with her personality; vibrant, outgoing and blatantly honest! She is a lover of bright colours. Her works are expressive of her lifestyle. She is a traditional, senior women who involve herself in Ceremony, dance and painting. She expresses herself to the fullest extent both on canvas and in the rituals of her ancient culture. 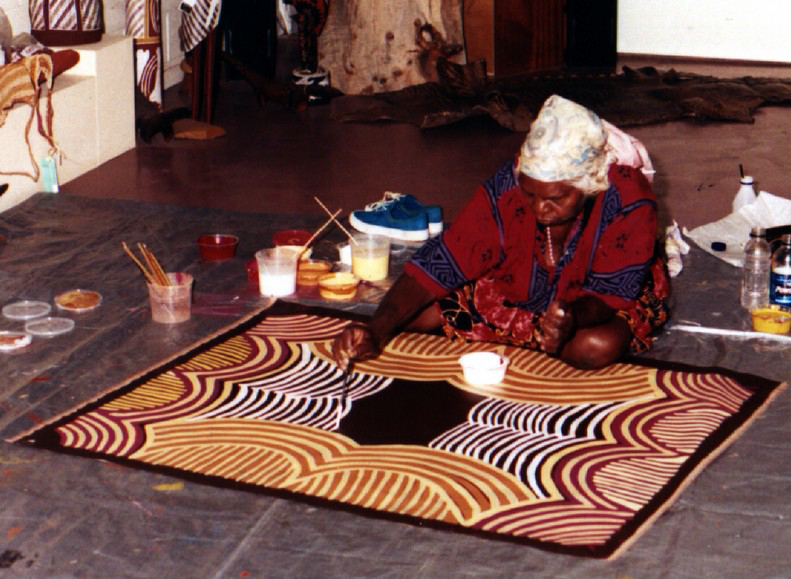