Dr.George is a composed and good-natured person. He has worked in the Kintore medical clinic as a traditional healer. His work there has given rise to the term, ‘Doctor’.

He was born in the Gibson Desert near Jupiter Well. Dr.George has one son and one daughter. He leads a traditional life moving between Kiwirrkura and Tjukula. He has been deeply immersed in painting and art since the early 1980s. He has learned the skills and techniques from a number of Traditional Aboriginal Artists.

His country spans approximately some 150 Kilometres around Lake Macdonald. This area encompasses Lake Mackay to the north, Sir Frederick Ranges and Lake Hopkins to the south, Jupiter Well to the west and Kintore to the east. Contained within this vast area of territory are a score or more of relevant traditional sites that he paints.

He paints two specific dreamings, the Tingari cycle and Snake dreaming. Dr.George employs different techniques when painting. One style incorporates the use of roundels in dot form or in block form whilst his other style incorporates the use of the above together with the arrangement of stripes across the canvas. These dreamings have been handed down from generation to generation for many thousands of years.

Dr.George must now keep this dreaming and pass it on to future generations so that it may be preserved. 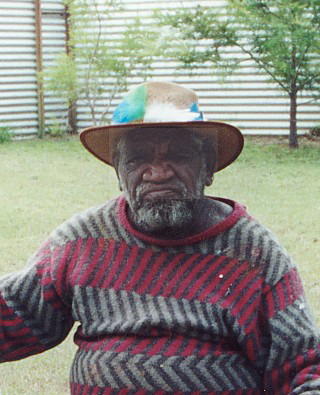