Kudtji Kngwarreye is one of Australia's leading Aboriginal artists. He was born around 1930, near Boundary Bore, Utopia. Kudtji is the custodian of his country. This land is situated approximately 230 km northeast of Alice Springs. He is a full brother of the renowned artist Emily Kame Kngwarreye from Utopia. Kudtji began painting in the late eighties after the art movement at Papunya was inspired by Geoffrey Barden. Prior to this, he had numerous jobs throughout the central desert. He was employed as a stockman and also worked in a number of mineral and gold mines in the Northern Territory. Kudtji has been represented in a number of major international exhibitions. This artist has gained recognition for his unique style. His work expresses an intimate link with the Earth and the Dreamtime stories relating to his country. The dreaming stories he paints are the emu man, seed dreaming and the yam dreaming. He also paints a number of other dreaming stories. Kudtji paints carefully and thoughtfully, depicting each of his works with the dreaming stories in his mind.

One highlight of his current work rests with his ability to contour and form his dreaming paintings, attuning them to his symbolism and ceremony. Moreover, Kudtji has the ability to bond together the earthy and timeless perceptions associated with his culture onto canvas. This communication is seen and felt through the high standard of work he sets for himself. The end results of this mastery being the transmutation of visual feeling for the viewer.

Kudtji’s work has been exhibited all over the world and across the Eastern and Southern States of Australia. He is an artist in high demand. As well, his work is constantly sought after by private collectors from around the world. 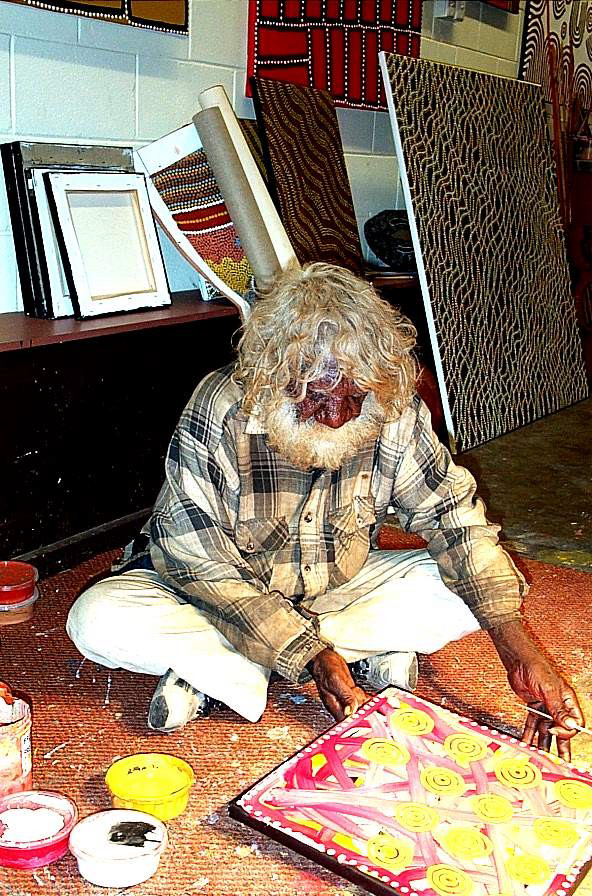