Paddy Fordham Wainburranga’s paintings and carved Balangjarngalain spirit figures are without parallel. The loose fluidity of line and form - in two or three dimensions - defies standard conventions. The borders of his paintings on bark and canvas are often crooked, the paint rough and unfinished but an impressive, gestural power dominates each painting. The spirit carvings, unlike the more static mini-figures of the Kurdal, are fluid, waving and suggest movement. Even the artist’s hollow log coffins are marked by potent imagery and spontaneous paint quality.

Although Paddy Fordham Wainburranga was taught to paint by his father, his art has branched in another direction and is not confined to the iconography of ritual and mythology. As a result of a lack of ceremonial status, the artist is not entitled to include country-defining symbolism or mark used by other Rembarrnga people. Paddy Fordham Wainburranga was displaced from his birthplace Bamdibu (south-west of Ramingining) to Beswick Station, 100 km south-east of Katherine.

The Rembarrnga language group from Central Arnhem Land has produced some highly original art practitioners over the years, however, none has matched the thematic inventiveness of Paddy Fordham Wainburranga. As a painter with a philosophical bent of mind, Wainburranga paints Ngalkbun Rembarrnga mythologies but also dedicates himself to recording the history of the region through a remarkable series of works produced since the eighties.

Wainburranga’s personal experiences which shaped his rather eclectic views on life were similar in many respects to those of other men from his generation. Born in his father’s country at Bandibu, between Malnjangarnak and Bulman, Paddy and his family followed many of the other Rembarrnga to the ration Depot at Maranboy during the wartime. It was later, after limited schooling at the nearby Government settlement Dandangle, that Wainburranga decided to become a stockman, working at various cattle stations from Mataranka to VRD, Killarney and Gorrie Station, then moving to Oenpelli, Goulburn Island and Milingimbi.

By 1962 after the introduction of citizenship rights for Aboriginals, he decided to give up being a stockman and went to the recently established settlement of Maningrida to live. Nearly twenty years later he returned to live with his Rembarrnga relations at Beswick. It was here in the early 1980s that Wainburranga began committing his stories to bark. 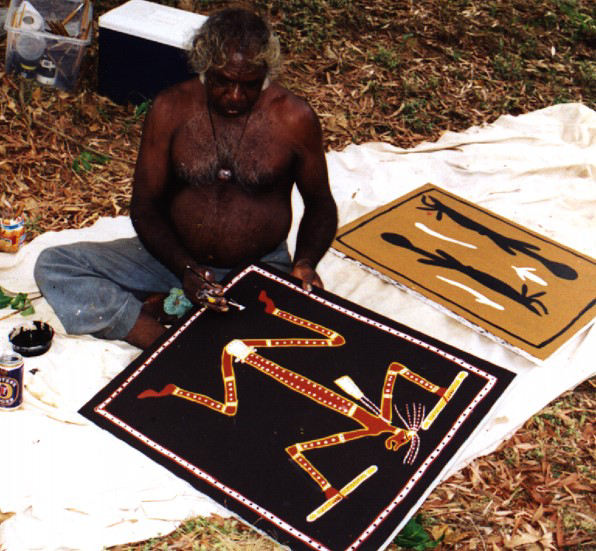